At the Aarhus School of Architecture, Nørreport 20, Aarhus. 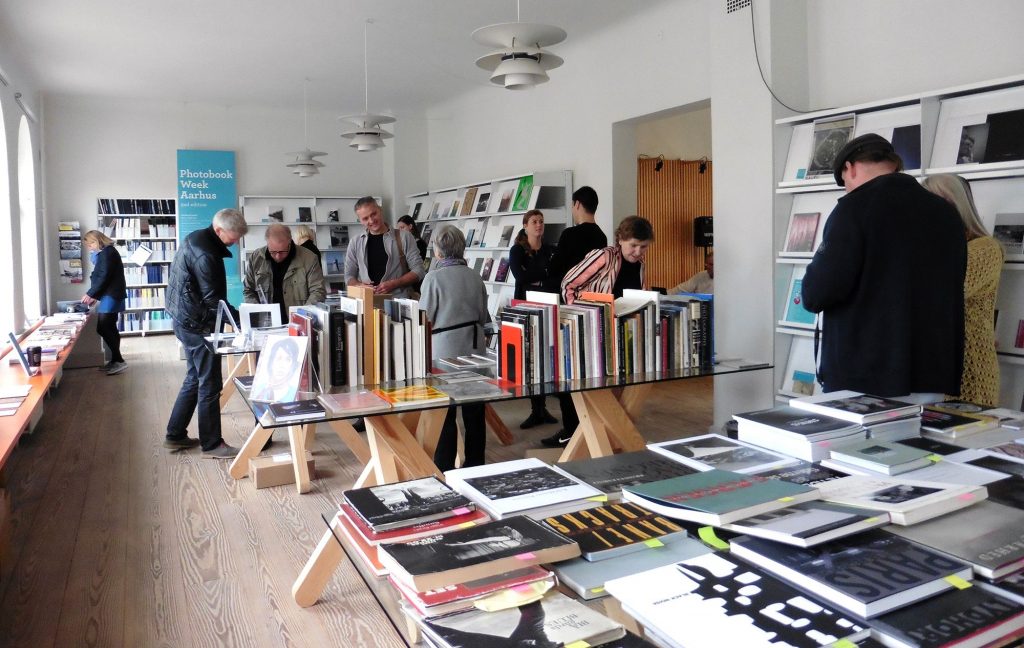 Need to get in touch? Email us at info@photobookweek.org

Galleri Image is a non-commercial exhibition space which aims to promote high quality photo based art by showing Danish and international photography and video. Founded in 1977, the gallery is the longest running non-profit exhibition space for photographic art in Scandinavia, and for many years was the only photo art gallery in Denmark.

SPACE POETRY exists since the early 1980s, when Jesper Fabricius, Claus Egemose, Jesper Rasmussen, and Joergen Brandt Birman published “Kontainer”, a
catalogue with photos from an exhibition they had made in 1979. Since then, more than 300 titles, including the collaborative magazine Pist Protta and Kunsthæfte
have been released.

Banja Rathnov Galleri & Kunsthandel presents a respectable selection of Danish and international photography and art books, both new and used, hand-picked by Banja Rathnov, the artistic director and curator of the Museumsbygningen in Copenhagen.

ARCHITEGN at AAA is a bookstore that specialises in books and journals on architecture, graphic design and industrial design from Danish and foreign publishers. Carrying more than 4000 titles on the shelves, this book seller is a landmark within its field.

Archipelaget is a new collaborative project led by Det Jyske Kunstakademi and the Aarhus School of Architecture for publishing of small and accessible books on Architecture and Art.

Det Jyske Kunstakademi is an institution of higher education, offering a 5-year educational programme in contemporary art, which is not divided into separate media specific departments. The academy is in a lively dialogue with the international contemporary art scene, and boasts both an exhibition space and a publishing house.

The Velvet Cell is an independent publishing house, set up in 2011 by Eanna de Freine. Its mandate is a simple one: to explore how the urban, in all its forms, continues to shape our lives – creating a social document on cities and in the process. By the middle of this century, it is estimated that nearly three quarters of the world’s population will live in cities. TVC’s publications bring a fresh approach to the representation of globalisation, steering clear of the apocalyptic and the monumental in favour of a more nuanced view of the way that the drive to urbanisation is transforming human experience around the globe.

Antipyrine is an independent publishing project started in 2013 by editor/curator Mathias Kokholm. They specialise in publishing works of art, literature and theory, economics, technology, vandalism, publishing as medium and practice, schizophrenia, science fiction and conceptual poetry. Antipyrine is an open concept of collective work and research, based on a backlist of complex and polemical titles formulating visions of the present. Antipyrine organises seminars, workshops and exhibitions, runs a bookstore in Kunsthal Aarhus and publishes the magazine Monsieur Antipyrine edited by artist Jørgen Michaelsen, art-historian Mikkel Bolt, author Mikkel Thykier, and artist Claus Handberg.

KATALOG – Journal Of Photography & Video spans more than 25 years of publication and worldwide distribution. The magazine is now independent and published biannually. With a distinctly Scandinavian/Nordic viewpoint, its expert multi-lingual research and English commentary, the magazine is an unrivalled source of education and reference, providing a powerful tool for scholars, researchers, and creative artists. All back issues have been fully indexed and the 96 pages of each issue feature thematic articles, interviews, presentations of artists, as well as reviews of exhibitions and books.

The Library Project, Dublin, is a library, bookshop and gallery dedicated to photography and visual culture, with unique and contemporary publications from all over the world and holding over 1000 items from 200 publishers worldwide. Initiated in 2011 by Claudi Nir and Ángel Luis González Fernández, the Library Project sets out to offer the public an on-going collection of the latest photobooks, magazines and zines, produced by independent publishing companies, well-established publishing houses and self publishers.

bt:st verlag is an independent publisher, from Kiel, Germany. Founded by photographers Angelika and Andreas Oetker-Kast, they publish their own projects as well as titles by other artists.

Journal is a Swedish publishing house specialising in photobooks, operated by editor and designer Gösta Flemming. Since its founding in 1991, more than a hundred titles have been released, among them books on Scandinavian photographers such as JH Engström, Anders Petersen and Nina Korhonen.

The Forlaget Wunderbuch is a publishing house dedicated to books that speaks to all senses, make curious, inspire the lingering thinking and encourage the repetitive reading. The genres vary between philosophy, poetry, fiction and art books. It received the Albertsen Fondens Pris  in 2016.

Thomas Wiegand is a collector and writer specialized in photobooks. His „Deutschland im Fotobuch“, published 2011 by Steidl, is an attempt to reflect the image of a country based on a carefully selected choice of the huge amount of photobooks published since the First World War. He is currently working on a book about the photo books produced in the former GDR (DDR). Some of these rare books will be available for purchase, for our festival visitors.